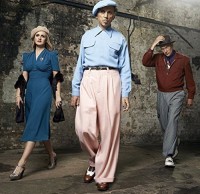 Dexys need little introduction, under their previous guise as Dexys Midnight Runners with Kevin Rowland at the helm they sold millions of records and had 2 number ones in Geno and of course Come On Eileen. First forward 30 odd years and Dexys Midnight Runners are now Dexys and have been since their first new album in 27 years 2012’s One Day I’m Gonna Soar. Release to massive critical and public acclaim the album charted at number 13 and received a rapturous response both live and on record.

June 3rd sees the long awaited new album from Dexys, Let The Record Show: Dexys Do Irish And Country Soul, an album that Kevin Rowland has been wanting to do since 1985. Kevin says “It’s in the title-Dexys DO Irish and Country Soul, Dexys DO it, not BECOME it, we’re not trying to be Irish, we haven’t used too many Celtic instruments on there, It’s OUR sound.” Kevin has always followed his intuition, from the bold, poetic soul stylings of Searching For The Young Soul Rebels through the fervent folk of Too-Rye-Ay to the once misunderstood, now revered drama of Don’t Stand Me Down. Let The Record Show displays a mature confidence without sacrificing any of the charism that makes Dexys special.

The album is a collection of “re-interpretations“ of songs that Kevin holds dear for a number of reasons. Including covers of Bee Gees’ ‘To Love Somebody’, Rod Stewart’s ‘You Wear It well’ and Johnny Cash’s ‘40 Shades Of Green’. In addition to these there are the first two singles, ‘Both Sides Now’ written and performed by Joni Mitchell and also recorded by Judy Collins and the lesser known ‘Grazing In the Grass’ originally by The Friends Of Distinction.


DVD (With Deluxe CD Edition Only)

The Dexys Film. Let The Record Show: Dexys Do Irish And Country Soul