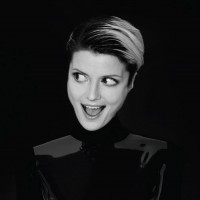 Following on from the success of her critically acclaimed ‘Incitation’ EP, Olga Bell is back with new album ‘Tempo’, released via One Little Indian Records.

“For those uninitiated, Bell’s work lies somewhere between an industrial night at Berghain and a cyborg performing at Carnegie Hall.” - Dummy

Barry says: Encompassing aspects of outsider-pop, synthwave and electronic soul, 'Tempo' confounds expectations of the singer songwriter. Quirky off-kilter rhythms and textures permeate the whole endeavour , rapidly switching from acid pulse-wave stabs to glitched out snares and clave hits. Like a medley of all the electronic tropes of the last 20 years, but distilled into a cohesive and concise representation of modern electronic music culture. This is a capable and sparkling outing, and at no point feels too far from comfort. Like hopping between ten different parties of ten different varieties, each playing different music, and loving each and every minute.