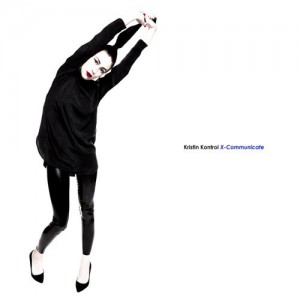 Sometimes you have to rip it up and start again. It was a tough call for Dee Dee. Dum Dum Girls was her guise for most of a decade, an outlet through which she’s crafted a resonant, instantly identifiable body of work. Over the course of three albums, four EPs and an array of singles, Dum Dum Girls morphed from the girl-group-gone-bad moves of their 2010 debut, ‘I Will Be’, to the plush noir-pop of 2014’s ‘Too True’, a dark heart burning bright but as her music evolve she found that for many she would be forever refracted through the prism of Dum Dum Girls’ early work: retro-leaning female harmonies, a backdrop of lo-fi, fuzzed up guitars.

In 2015 she decided to shed her skin, ditching Dee Dee for Kristin, her real name and adding Kontrol. It was a spontaneous idea that resonated. The challenge was to start fresh, go further back into her relationship to music. Sweep all her loves together into one genreless experience. “The first music I felt was mine was classic 80s pop and 90s R&B, from Tiffany, Janet Jackson and Madonna to TLC, SWV, and Aaliyah,” she says. “But for years I was hellbent on the rock ‘n’ roll thing, revering Joan Jett, Patti Smith, Chrissie Hynde,” - a rebellion against her classical vocal training - “but I was like, fuck it, I’m just going to try it all. I’m going to pretend I’m Kate Bush covering Mariah.”

Refocused and inspired, Kristin wrote 62 songs, whittled the list to ten for ‘XCommunicate’ and finished the album with the help of new producers Kurt Feldman (who had produced her ‘On Christmas’ single a few years back) and Andrew Miller (who played guitar on the first Dum Dum Girls album and had joined the band in its last incarnation).

Arguably the biggest shift, beyond the music itself, is that as Kristin Kontrol she tells her stories using a sonic palette splashed with bold pop melodies, her vocals showcasing a range hitherto unexplored on record. The songs that emerge from Kristin’s universe - a menagerie of new wave and R&B, European synth pop and experimental disco - are both familiar and unique, using genre rather than adhering to it, with a distinct nod to the present. It may be a leap into the unknown, but “little risk means little reward,” as Karen O once counselled her. “I feel free. I kind of excommunicated myself. Even if I have to rebuild my whole career, I’d rather work hard than feel stagnant. I feel excited again, and that's priceless.”

Barry says: I was born in the early 80's, It was a time (allegedly) when cheesy synth washes and digital synthesis was at it's peak. I was unfamiliar with the musical trends of the time, I was unemployed and partially useless. I was heavily reliant on others. What I should have been doing instead of lolling about at my parents gaff was getting a head-start on what would, 30 years later become my go-to cheer-up genre of choice. Gated synths and reverse-reverbed drums are in abundance, they use a LOT of chorus. They're not afraid of chorus' (chorii?) and verses. Feel-good retro synth-pop with a modern twist. Thoroughly surprised me this one, but i'm glad it did.