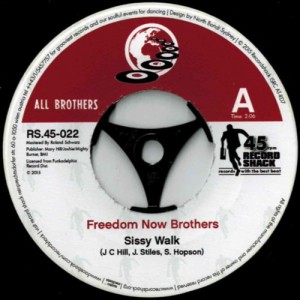 Record Shack are back on a reissue tip with more officially licensed and remastered badness for the soul dancers out there. This time round the Austrian imprint go back to back with two Philly funk instrumentals from way back when. First up, Freedom Now Brothers come through with the an all time classic inspired by a dance craze named 'The Sissy'. Originally issued in 1969 on Sonny Hopson's All Brothers label, this jam was later sampled by Fatboy Slim for the massive "Gangster Trippin". On the flip, the label dive into the deepest and dustiest crates to dig out an unreleased acetate version of RDM Band's rare as hen's teeth deep funk groover.