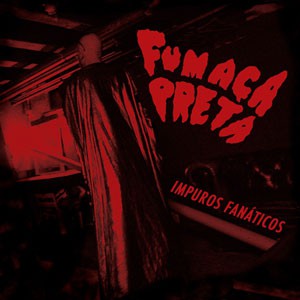 Having made a name for themselves as a cutting edge, genre-bending live and recording act on their debut, Fumaça Preta's 'Impuros Fanáticos' pushes one step further. Crossing psychedelia, free jazz, metal, tambu, voodoo, fado and a lot more, the album is a musical cocktail and a journey of experimentation.

From the meticulous recording of discarded metalwork in an abandoned factory in the middle of the Spanish desert, to a late night voodoo ritual in a remote village on the Venezuela/Brazil border, to steel drums recorded in a disused military base in Czech Republic, the record has a truly unique sound and feel, whilst retaining the band's frenzied grooves at its core.

2015 was a year of change for Fumaça Preta. Rising popularity and constant touring created conflicts and changes that translated directly into some of the darker, more contemplative moments on the record. Alex Figueira took over vocals, which expanded the language, with the addition of Spanish, and spectrum with the addition of Spanish and various melodic elements, creating a musical depth beyond that of the first.

"Fumaça Preta offer a cracked Latin American psychedelia that jives to the wiggier end of Tropicalia... while drinking deep from the Butthole Surfers' manky goblet of insanity" - The Quietus