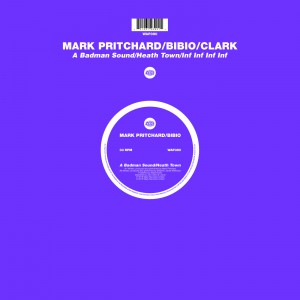 Mark Pritchard kicks off the 12 with throwback jungle anthem ‘A Badman Sound’; the classic Amen break gets laced with rave stabs and intermittent dub sirens.

‘Heath Town’ is the opposite of what you’d expect from Bibio. In particular, the second half takes stylistic cues from ‘A Badman Sound’ and features the popular, euphoric James Brown-produced ‘Yeah Woo’ sample.

Clark winds down with ‘Inf Inf Inf Inf’, a more ambient sound that brings in broken beats and is reminiscent of early Aphex Twin.

2016 is an exciting year for all three artists:

In May, Mark Pritchard is releasing his first album under his own name.

In April, Bibio releases his fifth album on Warp, A Mineral Love.

And after releasing his most successful album yet in late 2014, Clark returns with ‘The Last Panthers’ record, inspired by his score of the Sky Arts drama series of the same name.