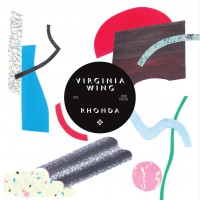 Virginia Wing are not from the sedate school of dream-pop escapism…a hazy subversion of the traditional monochrome evocations of post-punk, a photo negative of an established form.” - The Quietus // “South London three-piece ally buzz and drone with sweetness and light” Guardian – New Band Of The Week // "A piece of noir-pop majesty that consistently pushes its own boundaries and frequently shatters the listeners’ sense of expectation" Loud and Quiet // "They possess a rare ability to dive deep beneath the skin.. a ghostly mix that flirts hard and fast with the avant garde while retaining a sly pop lustre" Mojo 4* // Following the 2015 release of their acclaimed debut album ‘Measures Of Joy’ on Fire Records, Camberwell based outfit Virginia Wing return with a striking new single. ‘Rhonda’, released for Record Store Day on 12” vinyl with a disco cut sleeve featuring artwork from longtime collaborator Florian Brooks. Recorded at Hackney-based Holy Mountain Studios with Misha Hering, ‘Rhonda’ sees the band expand the deep and varied sonic palette displayed on their debut ‘Measures Of Joy’. Featuring guest musician Koichi Yamanoha of Grimm Grimm, the single unfolds slowly as meditative incantations give way to a sprawling piece of experimental pop for the dance floor. The ambitious A-side flirts with disco beats and draws influence from a variety of schools of contemporary dance music whilst still remaining, at heart, a pop song. This is pop music with texture, depth and nuance; a daring and progressive piece. The B-side includes two new tracks: ‘Sisterly Love’ and ‘Daughter Of The Mind’ which further hint at the deviations we can expect on their second LP. Field recordings, ambient mediations and rhythmic experimentation abound; the new material sees Virginia Wing refining and reworking the sound conjured on their debut, a masterful workout and one that provides a thrilling incentive to await LP2 with baited breath. Following a headline European tour and a UK tour with Hookworms last year, Virginia Wing will be releasing their second album in autumn 2016. Forming in 2012, Virginia Wing are Alice Merida Richards, Sam Pillay and Sebastian Truskolaski.

A1 Rhonda B1 Sisterly Love B2 Daughter Of The Mind