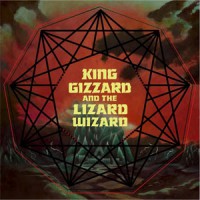 Recording, releasing and touring a couple of albums in 18 months is beyond the realms of comprehensibility for most bands, but then King Gizzard And The Lizard Wizard aren’t ‘most bands’. Forget a couple of albums, Friday April 29th 2016 marks the release of Nonagon Infinity, their fourth long-player for Heavenly Recordings in a little under a year and a half. Workshy they ain’t!

After the acid-flecked cosmic jazz of Quarters and the hazy, pastoral, acoustic bliss of Paper Mache Dream Balloon, with Nonagon Infinity the Gizzard once again dive head-long into the gonzo freak-beat frenzy that mark both their Heavenly debut I’m In Your Mind Fuzz, and their perpetually in motion, double-drummer propelled live show.

Recorded by Wayne Gordon, Paul Maybury, Michael Badger and Stu Mackenzie at Daptone Studios in Brooklyn, in keeping with their indefatigable spirit the 9 track album may be the world's first infinitely looping LP. Each of the nine, complex, blistering tracks on Nonagon Infinity seamlessly flows into the next, with the final song linking straight back into the top of the opener like a sonic mobius strip.