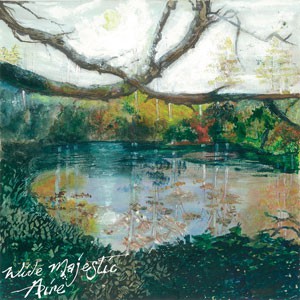 Trembling Bells are back with Wide Majestic Aire; a seven-track mini-album, which acts as a companion, piece to The Sovereign Self and cements their reputation as one of Britain’s most exciting and exploratory groups.

“‘Wide Majestic Aire’ is among my favourite songs that I’ve written,” says the band’s founder and leader Alex Neilson of the title track. This romantic ballad, sung by Lavinia Blackwall, sees the compass of the band’s music swing back in the direction of folk after the prog and acid rock of Sovereign Self. It is in some ways archetypally Trembling Bells in its evocation of the landscapes of Yorkshire and Oxford and its invocation of great artists of the past - Larkin, Blake, Lorca and Turner. Such a sweet and melodic song could function as a gateway drug to the rest of the band’s music, which is to be welcomed, as there is much to explore in their rich back catalogue.

A major river in Yorkshire, the Aire passes through Leeds, Neilson’s hometown. “The Aire was a sanctuary for me,” he says. “I grew up on a council estate in Bramley and the river was five minutes away. As a teenager I’d listen to the Velvet Underground, Captain Beefheart and Incredible String Band while walking my dogs along the banks. These were the things that moulded me and sent me on a certain path in life.”