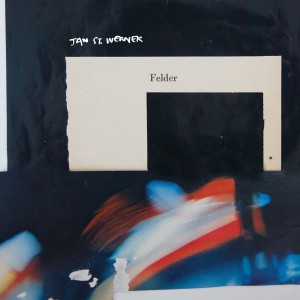 Jan St. Werner, the well-respected artist and musician known for his solo compositions, his work with Mouse On Mars and art pieces, has created a beautifully rhythmic, instantly gripping work with his new album ‘Felder’.

Werner has created sounds that are listenable and inviting, complex but approachable and, mostly, completely unidentifiable. ‘Felder’ means ‘fields’ in German and here the word refers to conceptual frameworks and subjects and sound fields. Werner mixes organic sounds from French horns and cellos seamlessly with synthesized notes created with one-of-a-kind programs. He builds layers of sound with differing cadences upon one another, creating intricate patterns that connect with each other structurally, rhythmically, semantically and historically. Suggestions of jazz, industrial music, drone and even folk float in and out of the electronic compositions in a seemingly effortless manner; paradoxically, ‘Felder’ was meticulously constructed over the course of four years.

In addition Werner has worked with the visual artist Rosa Barba on pieces premiered at London’s Tate Modern, the MIT List Visual Arts Center and the Reina Sofia in Madrid.