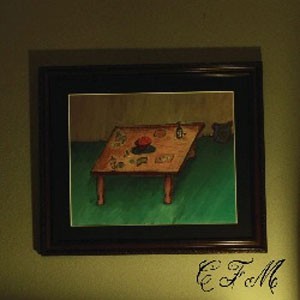 CFM is Charles Francis Moothart. He has been making records for the past decade, playing various instruments in various bands—bass in The Epsilons, drums in The Moonhearts, and guitar in The Ty Segall Band and, most recently, Fuzz. Still Life of Citrus and Slime is Moothart’s first solo effort and it’s a great one.

Moothart says, “Still Life of Citrus and Slime—the idea of creating something outside of the comfort zone. Blending basic elements of necessity, release and escape. An attempt to fuse reality with the elusions of the possible. The music represents an elevation beyond the barriers of linear motion and self-doubt. It is similar to looking in a mirror and realizing that time trails itself constantly by just a millisecond. You cannot kill time, and you cannot exist on both sides of the reflex. Yet, to bridge the gap is to eliminate instinct and output in their purest forms.

“This record is a portrait of a person navigating the mechanics of two distinct machines. The first—the brain. The second—the Tascam 388. Eight tracks and a quarter-inch path to maneuver to the summation. The songs simmer from rare to well done. No matter the cut, the meat is fresh and still vibrating with life. “Fast, slow, wonky and straight. There are moments of everything in these grooves. At times it feels like it could come apart at the seams, but it doesn’t. It grabs the thread, bites the end, pulls it tight and continues the experiment. It’s rock ’n’ roll, and that’s all. The greener grass is browning on the other side. The drought is here to stay. The only way out of this mess is to put your head down and do the right thing. Keep moving, keep trying, keep creating, and project any positivity possible. Of course it is much easier to succumb to the wolf. Just forget about it, and pretend it is out of your control. Thankfully the wolf let down his guard. Having found refuge in a blanket of heartache and a bottle of wine, he took a cat nap in a manger of confusion.”