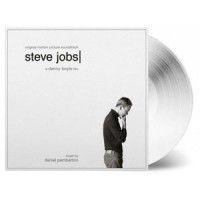 Record Label
Music On Vinyl At The Movies

Composer Daniel Pemberton follows up his movie score for The Man from U.N.C.L.E. [MOVATM056] with not one but three different scores for Steve Jobs, the new Danny Boyle film starring Michael Fassbender as Apple's controversial visionary leader.

The first act "Vision" is set in 1984 when Steve Jobs had his vision of what personal computing could bring to the world. Then there is "Revenge" in 1988 when he sets up this company pretty much to get revenge on the people he thought had betrayed him at Apple. Finally, "Wisdom" is the climax with his own personal realization of what his goals in life have been and what has been slightly misguided.

Pemberton wanted to have a sound that captured the times so for the first act he used synthesizers from the early '80s. The third act is performed on a Mac computer using Logic - modern technology which wouldn't be available weren't it for Apple. For Act II, he used "the oldest computer that still exists, which is the orchestra. You give them information which is notation and they interpret that in a way better than any piece of technology has managed to beat.