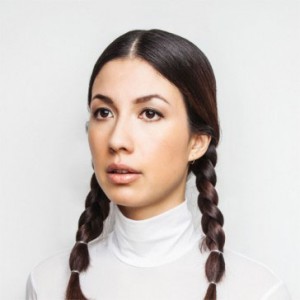 BONUS DISC INFO: Emmy was born in Hong Kong to a Chinese mother and English father and spent most of her childhood there. She's always been a fan of UK/US music but there has also been a less conspicuous affection for South East Asian pop derived from her time in that past of the world. When she plays in Hong Kong she often throws in a couple of local songs sung in Cantonese. And on this bonus CD she has finally found the time to record some of her own songs in Cantonese and Mandarin. In the case of the latter admittedly with some help from her mother.

There is a distinct nod to her debut ‘First Love’ in terms of the storytelling that first impressed her lyrical and emotional dexterity upon so many. On ‘Second Love’, however, Emma-Lee Moss delves into the chambers of a human heart ever-connected to the glare of a nearby screen.

This is an album imbued with modern sounds, a nod to new eras while maintaining the human warmth always associated with an Emmy The Great album. The songs are full of emotion and questioning, with the chatter of friends and collaborators ‘coded’ into the sonic landscape. These tender, glacial arrangements lead ‘Second Love’s exploration through a new world, filtered through technology.

“In all the uncertainty,” Emmy concludes, “I couldn’t say for sure whether this is Utopia or Dystopia or something in between, but for some reason it only made me more certain of one thing: that, wherever we’re heading, we’re going to need music, and we’re going to need love. ‘Second Love’ not only helped me reach this conclusion, it led me to almost every good thing that has happened to me in the last three years.”

The roll call of talent enlisted to assist Emmy The Great’s new albums is as impressive as the vision itself. Produced by Dave McCracken (Oh Land, Beyonce) and Ludwig Goransson (Haim, Childish Gambino) and mixed by Neil Comber (M.I.A.), the album features musicians from far and wide, including Tom Fleming (Wild Beasts) and Leo Abrahams (Pulp, Brian Eno).