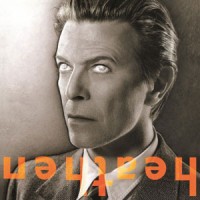 2002's 'Heathen' reunited David Bowie with producer Tony Visconti ('Space Oddity', 'Heroes', 'The Man Who Sold The World') for the first time in 20 years and featured guest appearances by Who legend Pete Townshend and Foo Fighter Dave Grohl. Townshend, who last worked with Bowie on the 1980 Scary Monsters And Super Creeps track "Because You're Young," contributes an incendiary lead guitar line to the track "Slow Burn," which Bowie called "the most eccentric and aggressive guitar I've heard Pete play."

"Slow Burn" also features a performance from The Borneo Horns, who accompanied Bowie on the Serious Moonlight tour while Grohl takes lead guitar duties on the Neil Young cover "I’ve Been Waiting." Other standout tracks on Heathen include the sublime "I Would Be Your Slave," the uptempo "Afraid," the epic "Slip Away" and "Everyone Says Hi," a beautifully melodic tune with a classic Visconti string arrangement.

“Heathenism is a state of mind,” explained Bowie. “You can take it that I’m referring to one who does not see his world. He has no mental light. He destroys almost unwittingly. He cannot feel any God’s presence in his life. He is the 21st Century man. There’s no theme or concept behind Heathen, just a number of songs, but somehow there is a thread that runs through it that is quite as strong as any of my thematic type albums.”