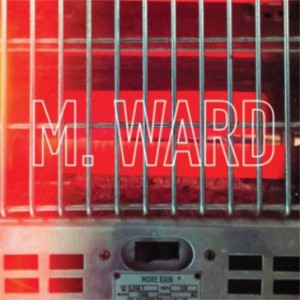 M. Ward returns with a stunning new album, ‘More Rain’, released on Bella Union. Ward has released a string of acclaimed solo albums over the past several years, along with five albums with Zooey Deschanel as She & Him and a 2009 collaborative album with My Morning Jacket’s Jim James and Bright Eyes’ Conor Oberst and Mike Mogis under the moniker Monsters Of Folk.

In addition to his celebrated work as a musician, Ward is an accomplished producer, handling those duties for such luminaries as Mavis Staples, Jenny Lewis and Carlos Forster as well as his own projects.

M. Ward knows how to live with rain. Having spent the last decadeand- a-half based in the perennially damp Portland, Oregon, the singer-songwriter and producer has learned how to shine through the soggy gloom by simply embracing its inevitability. For Ward, there is inspiration in a dark sky and harmony in foreboding winds. With his new album ‘More Rain’ he has made a true gotta-stay-indoors, rainyseason record that looks upwards through the weather while reflecting on his past.

“I think one of the biggest mysteries of America right now is this: How are we able to process unending bad news on Page One and then go about our lives the way the style section portrays us?” says Ward. “There must be a place in our brains that allows us to take a bird’s-eye view of humanity, and I think music is good at helping people - myself included - go to that place.”

This album, Ward’s eighth solo affair, finds the artist picking up the tempo and volume a bit from his previous release, 2012’s ‘A Wasteland Companion’. Where that record introspectively looked in from the outside, ‘More Rain’ finds Ward on the inside, gazing out. Begun four years ago and imagined initially as a DIY doo-wop album that would feature Ward experimenting with layering his own voice, it soon branched out in different directions, a move that he credits largely to his collaborators here who include REM.’s Peter Buck, Neko Case, kd lang, The Secret Sisters and Joey Spampinato of NRBQ.