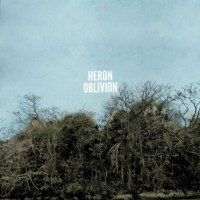 Listening to Heron Oblivion’s album feels like sitting in a lovely meadow in the shadow of a dam that’s going to burst any moment.

Members of this new San Francisco combo have put in time in both raging and relatively tranquil psychedelic sound units. This is the premise and the synergy behind this very unique and special new album.

The group first properly gigged in April of 2014 opening for War On Drugs. They finished the record independently then inked a deal with Sub Pop in early 2015. Most recently they toured the West Coast with Kurt Vile and Cass McCombs.

‘Heron Oblivion’ was recorded at The Mansion in San Francisco by Eric Bauer.

“Expressive guitar lines laced with feedback sprawl out again and again without trailing away too far. Meg Baird’s serene voice harkens back to ’60s folk singers, subdued in a way that lends special gravity without being bombastic. Frankly, the group sounds exactly like what psychedelic rock should sound like” - Stereogum