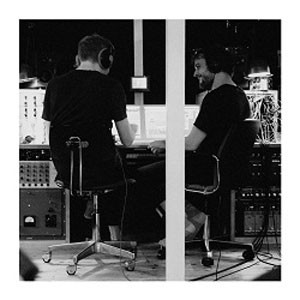 Having been available exclusively as the second disc to 2015's 'Collaborative Works', Ólafur Arnalds and Nils Frahm's improvised audio recordings 'Trance Frendz', taken from their 45-minute studio film of the same name, have been given their own vinyl release – out March 4th, 2016.

Prior to a string of collaborative Erased Tapes releases, which include 2012's 'Stare' 10” and last year’s 'Life Story Love and Glory' 7” and 'Loon' 12” – compiled on the 'Collaborative Works' 2-CD set, Ólafur Arnalds and Nils Frahm spent many hours together in their studios across Berlin and Reykjavik. Both have carved out genre-defying musical careers and formed unique live shows, creating a fan base loyal to their prolific output.

During a session at Durton Studio in Berlin last summer, Nils and Ólafur invited Alexander Schneider and his camera to document it. The recording continued long after the first take, stretching out into the next day until, eventually, several new improvisations had been recorded in 8 hours with no overdubs or edits. The unexpected nature in which these pieces had been created was reminiscent of their first on-stage improvisation many years ago. It became immediately clear how special these songs were.

"At the end of the night we had all this music that sounded unfamiliar even to us, loudly asking to be included in this collection.”

Originally made available as a 45-minute film on their joint website (www.arnaldsfrahm.com) last September, 'Trance Frendz' is now available on vinyl. Press for their 'Collaborative Works':

'An enchanting listen. The bar for a Lads' Night In has just been raised a few notches' (7/10) – Drowned In Sound.

‘This is music for slowing down the pace of modern life... An immersive listening experience is guaranteed, while we must hope Frahm and Arnalds go on ‘holiday’ together more in future, and don’t forget to take their musical instruments.’ ★★★★ – MusicOMH.

'A collection of gorgeously intimate piano compositions and eye-opening synth pieces, each never aggressive but always powerfully poignant' (8/10) – Under The Radar.

'What Collaborative Works offers is something strange: a shared world created by two mad geniuses. Long may Arnalds and Frahm tinker' (8/10) – PopMatters.