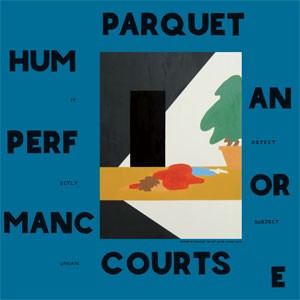 Recorded over the course of a year against a backdrop of personal instability, Human Performance massively expands the idea of what a Parquet Courts record can be. They've been one of the most critically acclaimed bands of the last 5 years; this is the record that backs all those words up.

“Every day it starts, anxiety,” began the first song on 2014’s Content Nausea. Those were essentially the song’s only lyrics, but Human Performance picks up where that thought left off, picking apart the anxieties of modern life: “The unavoidable noise of NYC that can be maddening, the kind of the impossible struggle against clutter, whether it's physical or mental or social,” says singer, guitarist and Human Performance producer/mixer Austin Brown.

There has always been the emotional side of Parquet Courts, which has always had an important balance with the more discussed cerebral side, but Andrew Savage sees Human Performance as a redistribution of weight in that balance. "I began to question my humanity, and if it was always as sincere as I thought, or if it was a performance,” says Savage. “I felt like a sort of malfunctioning apparatus,” he says. “Like a machine programmed to be human showing signs of defect.”

The sonic diversity, time, and existential effort that went into its creation makes Human Performance Parquet Courts' most ambitious record to date. It's a work of incredible creative vision born of seemingly insurmountable adversity. It is also their most accessible record yet.

Darryl says: After bursting on the scene with the explosive and thrilling splendour of “Light Up Gold” (a Piccadilly Records Album Of The Year back in 2013) Parquet Courts seemed to be on a mission to alienate with a succession of somewhat “difficult” releases, the ‘Monastic Living’ EP in particular was a real head scratcher! But thankfully with ‘Human Performance’ the Brooklyn based four piece have rediscovered their smart pop edge.
Kicking off with the upbeat and catchy “Dust”, the band immediately plug in to their trademark “Americana punk” showcasing an uber cool sound that brings to mind the perfect New York lineage of Sonic Youth, Television and The Velvet Underground.
Almost every track on ‘Human Performance’ screams “Single” potential; we have the goofball pop of “I Was Just Here”, “Berlin Got Blurry” and afore mentioned “Dust”; the slacker-rock (dare we say Pavement influences?) of “Paraphased”, “Outside” and “Keep It Even”; the jaunty rumbles of “Pathos Prairie” and “Captive Of The Sun”; the mellow hazy-psych of “Steady On Mind” and the uptempo but chilling “Two Dead Cops”. The title track chronicling a relationship breakdown is a serious song of the year contender with its introspective verses and explosive shouted choruses; and then we have album’s centrepiece, “One Man No City”, a six minute plus drawn-out long-jam epic combining bongos and the jagged guitars of “The Gift” period VU. Lastly, "It's Gonna Happen" is a perfect finale, a brooding refrain that leads out with the reflective “…it’s gonna happen every time so rehearse with me in mind…”
‘Human Performance’ is Parquet Courts reaching a songwriting peak, refined and intelligent off-kilter Brooklyn art-rock.