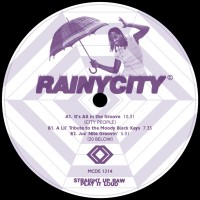 Massive round these parts back in the day, City People's 'It's All In The Groove' is just that: a jazz-funk infused house groover with syncopated toms, bumpin' bassline and keyboard flares. On the flip 20 Below's 'A Lil' Tribute To The Moody Black Keys' pays homage to Kenny Dixon Jr with its funky Detroit garage sound, while 'Jus' Nite Groovin'' offers some jazzy chords over funky house beats.

MCDE says "We are happy to announce our first reissue 12" on MCDE Recordings, a record from Manchester deep house label Rainy City Music (written by Irfan Rainy & Rex Leon in 1995), that we have been working on licensing for over a year now; a record that had been a secret weapon of DJs such as Theo Parrish, Marcellus Pittmann, Mike Huckaby, Jeremy Underground and myself - arguably one of the finest house music 12"s to ever come out of the UK. To mark the 20th anniversary of the original release, we have carefully remastered the tracks from the original DAT tapes and only slightly modified the original cover artwork. Its All in the Groove baby! "