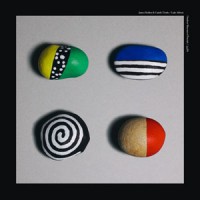 Holden and Luke Abbott flirt with the new age in this split double album, with a pair of extended synth meditations indulging their respective loves of arpeggio and drone, originally composed for the occasion of Terry Riley’s 80th birthday. Holden’s "Outdoor Museum Of Fractals" fuses the endlessly unfolding fractal complexity of luxurious washes of arpeggiations with the pitched tabla drumming of Camilo Tirado, co-pilot on this hypnotic, meditative journey. Luke Abbott’s metallic gong-drone offering "555Hz" layers this mystical frequency and its related harmonics in a sequence of transportive wave-like swells. Running to over 45 and 30 minutes apiece in digital form but split in two to fit on the vinyl. The heavyweight double vinyl also includes uninterrupted digital download codes.

Barry says: Border Community head-honcho and fanatic Synthesist James Holden teams up with one of the label's many star signings on this double LP. On one LP Holden jams over the trance-inducing Tabla playing of Camilo Tirado to full new-age effect, whilst on the other, known hardware-fiend Luke Abott explores drone and ambience. Both sides are exercises in skill and restraint and show how truly talented these guys (and generally, Border Community as a whole) are. Worth the effort this one, and a record that reveals more every time I listen.