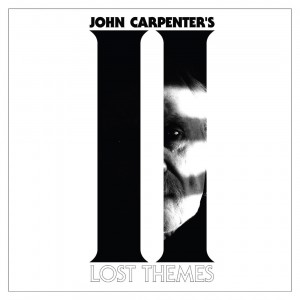 On Halloween 2014, the director and composer John Carpenter introduced the world to the next phase of his career with “Vortex,” the first single from Lost Themes, his first-ever solo record. In the months that followed, Lost Themes rightfully returned Carpenter to the forefront of the discussion of music and film’s crucial intersection. Carpenter’s foundational primacy and lasting influence on genre score work was both rediscovered and reaffirmed. So widespread was the acclaim for Lost Themes, that the composer was moved to embark on something he had never before entertained – playing his music live in front of an audience.

2016 will host the first ever John Carpenter tour and in true Carpenter spirit, a sequel to Lost Themes: Lost Themes II. The follow-up brings quite a few noticeable changes to the process, which result in an even more cohesive record. Lost Themes’ cowriters Cody Carpenter (John’s son) and Daniel Davies (John’s godson) both returned. Cody was recently also heard as a composer for Showtime’s Masters of Horror series (Cigarette Burns and Pro-Life), and NBC’s Zoo. Davies was a composer for NBC’s Zoo, as well as the motion picture Condemned.

All three brought in sketches and worked together in the same city, a luxury they weren’t afforded on the first Lost Themes. The result was a more focused effort, one that was completed on a compressed schedule — not unlike Carpenter’s classic, notoriously low-budget early films. The musical world of Lost Themes II is also a wider one than that of its predecessor. More electric and acoustic guitar help flesh out the songs, still driven by Carpenter’s trademark minimal synth.

Keep your eyes peeled for John and his co-writers to hit the road next year performing both lost and newly found themes, in addition to retrospective work from Mr. Carpenter’s multi-generational career. Long live the Horror Master.

Barry says: Master of Kosmische synth-workouts and general synth-based sountracking legend John Carpenter returns here with the second instalment of his surprising 'not a soundtrack' offering from last year. More twinkling synths, motorik pulses and cavern-soaked reverbed drums. Though soundtracks have always been Carpenters raison d'etre, this outstanding expansion on his lost themes selections just goes to show that Carpenter is indeed the king of the cosmic.