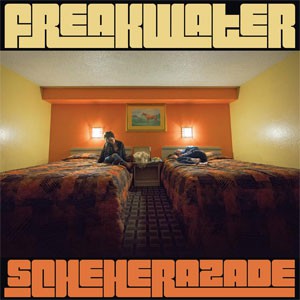 Scheherazade is Freakwater’s eighth album and first in over 10 years.
Like the heroine of Scheherazade’s The Arabian Nights, their longevity sometimes depends on leaving their audience hanging. It is a release of familiarity as much as it is one of change, one that is distinctly different, but never loses sight of what it is that makes them Freakwater: It's new blood from a familiar vein.

Anchored around the fragile and compelling harmonies of Janet Bean and Catherine Irwin and the subdued, oracular bass playing of Dave Gay, their utterly unique sound is distilled from many sources. There’s the elemental ache and loss in the soil & limestone of Kentucky and the songs & struggles that passed over the Atlantic from the British Isles centuries ago. There’s the energy and freedom in the ratty punk clubs of Louisville and Chicago at a time when rules and formalities were meant to be ignored. At once bluegrass, blues, folk, and country, it is also none of them; Freakwater is not dealing in historical artifacts. Rather, it is a product of two voices intertwined with one another for over three decades, creating a sound that might be best summarized as Appalachian soul.