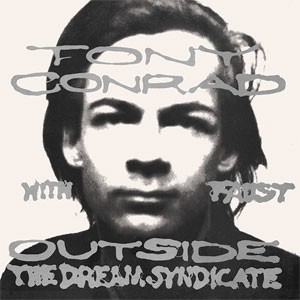 Violinist, composer and filmmaker Tony Conrad started his career in New York in the early 1960s. As a member of the Theater of Eternal Music (a.k.a. the Dream Syndicate) alongside John Cale, La Monte Young, Marian Zazeela and Angus MacLise, he participated in now-legendary and often legendarily loud drone performances with many pieces having no beginning and no end. During a fateful trip to Germany in 1972, Conrad met with avant-rock visionaries Faust and made the very first record to bear his name.

Outside The Dream Syndicate, originally released in Europe only in 1973, is a stunning debut. Two side-long tracks – "The Side Of Man And Womankind" and "The Side Of The Machine" – show just how far Conrad had moved beyond his minimalist peers. Werner Diermaier's repetitive drum beat and Jean-Hervé Peron's stripped-down bassline conjure a tense, ascetic groove, while Conrad's seamless violin, initially so controlled, reveals a surprising adaptability. The music shifts almost on a subliminal level, pushing and pulling to the drone's internal pulse.

This vinyl reissue has been carefully mastered from the original master tapes and includes liner notes by musician Jim O'Rourke and author Branden W. Joseph.