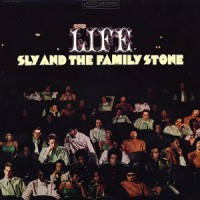 Originally released in late 1968, Sly And The Family Stone's third album, "Life", is the forgotten jewel of the band's illustrious catalogue. If the first two albums can be seen as Sly Stone's fine-tuning, "Life" was fully realised music, alive and vibrant. While "Life" got lost in the tidal wave intensity of the band's breakthrough a year later with "Stand!", now nearly four decades later, we can listen without distraction, savor the richness of its musical tapestry, and marvel.

Many of its songs, including “M’Lady”, “Fun”, “Love City”, as well as the title track, became popular staples in the Family Stone’s live show. A middle ground between the fiery A Whole New Thing and the more commercial Dance To The Music, Life features very little use of studio effects, and is instead more driven by frontman Sly Stone’s compositions.

Sly And The Family StoneDance To The Music