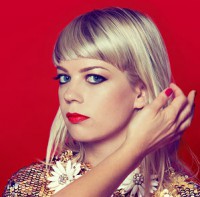 Bulat teamed-up with friend and collaborator Jim James of My Morning Jacket on the album’s production, driving 600 miles from her home in Montreal to La La Land recording studio in James’ hometown of Louisville, Kentucky. Bulat originally met James backstage at the Austin City Limits music festival; the two reconnected when she toured with him in the summer of 2013 and became friends. Good Advice is a departure from Bulat’s previous work, with her voice backed up by drums, bass, electric guitar and keys. James plays electric guitar, synth, saxophone and bass on the album; further Louisville guests including members of Houndmouth, Twin Limb, Seth Kauffman of Floating Action and more also join Bulat.

“Pop songs can take all those big statements and those big feelings that you have,” Bulat says. “You don't need to necessarily have everything so detailed because everybody understands. Everybody understands those feelings.” “Basia has something truly unique,” says James. The duo recorded the album over several visits Bulat made to Kentucky. “I knew immediately that it was the exact right place to be,” says Bulat. “To go so far from home, then to find that it felt like home.”
Of the sessions, James recalls, “The entire process was so amazing. Hearing her voice just exploding out of her soul brought us all to tears in the control room. Watching Basia come out of her shell with great power was an extraordinary thing to witness.”

Since the release of her debut album, Oh My Darling, Bulat has shared the stage with artists including Arcade Fire, The National, Nick Cave, St. Vincent, Beirut, Andrew Bird, Tune-Yards, Sondre Lerche, The Tallest Man on Earth, The Head and the Heart, Owen Pallett, Devotchka and many more. Known for her talents on little-known instruments including the autoharp and charango, Bulat has also been tapped for tributes to Leonard Cohen and The Band.

Millie says: ‘Good Advice’ is a breath-taking album which is filled with heartache. It begins with her deep soulful voice, it’s bold and resolute then the end of the album shows us an enchanting whimsical finish (the song Someday Soon especially) It’s very emotional; you need to listen to it!

Basia BulatAre You In Love?