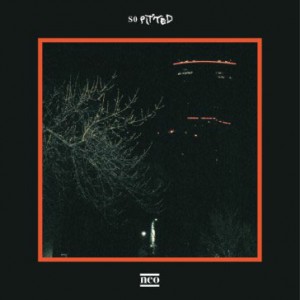 “We’re a band named after a YouTube video. I like that.” Nathan Rodriguez, of Seattle’s So Pitted, is referring to a viral clip of a surfer, standing on the shore in front of mountainous morning waves, relaying to a reporter the glory of the ocean conditions from which he has just emerged. To most, the clip is a funny nugget of Spicoli brah-speak but to Rodriguez and his bandmates Liam Downey and Jeannine Koewler ‘So Pitted’ is way more than just that gung ho, slacker-speak catchphrase. “That surfer gets carried away talking about what he loves, because to him that’s all that really matters,” says Rodriguez. “I don’t surf, but to this surfer ‘so pitted’ is following through instead of bailing. You can take that abstraction and repurpose it to anything you like.”

So Pitted are every bit an experiment in social partnerships as they are a noise outfit. They bonded over a shared love of alternative music - Rage Against The Machine, Smashing Pumpkins, Nine Inch Nails, The Mars Volta. Rodriguez is a self-taught quick study who learned music theory on Wikipedia; Downey is a new wave fanatic who sticks pipe cleaners in his brain to speak to extraterrestrials; Koewler is a longtime ballet dancer whose love of aesthetes and bands like Cocteau Twins is a strong influence on her bandmates. Roles and positions have never been important to So Pitted: Rodriguez and Downey often switch instruments and both sing, while Koewler plays her guitar through a bass amp. Together, the trio just fits, a perfect balance for one another’s quirks, strengths and shortcomings.

Enter ‘neo’, So Pitted’s debut album some years in the making. These eleven tracks are lean and snarling rebukes, torch songs not in the traditional, unrequited-love sense but songs that will torch your house down. It’s fuzzy, angular, throbbing, pounding, yet catchy. Songs crash over and over, turning under themselves like waves but, as the measures tick off, the dog-eared melodies arise.

For all its power, growth, and complexities, ‘neo’ is but a slice in time. It stands for anything new and the necessity of revisiting ideas - nothing is above an update. In Rodriguez’s words, “Our whole process is not perfect, but I don’t think it’s supposed to be. That’s not the point.”

‘neo’ was co-produced and mixed by So Pitted and Dylan Wall and recorded at The Old Fire House, Media Lab, Spruce Haus, the band’s practice space and Tastefully Loud in Seattle. ‘neo’ was engineered by Wall at Tastefully Loud and mastered by Eric Boulanger at The Bakery in Los Angeles.