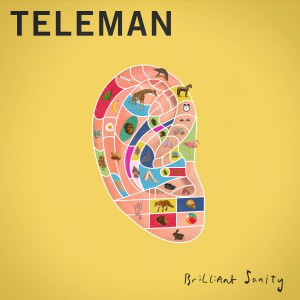 The art of songwriting has been the driving force behind Brilliant Sanity, the process of crafting of the immaculate pop song, the dogged pursuit of the perfect hook. The result is an album that appears fastidiously and impeccably made, but also charged with joy.

Now a four-piece made up of singer and guitarist Tommy Sanders, his brother Jonny on synths, Pete Cattermoul on bass and Hiro Amamiya on drums, the process of touring has honed Teleman into a spectacular live act and brought about the decision to record the new record in a very live and spontaneous way.

Six months were spent in a rehearsal space in Homerton, working on the songs written by each band member, with Sanders’ own songwriting forming the core of the album. “I don’t know if other bands do this,” says Tommy Sanders, “but in our rehearsal room we had a white board, and for each song we’d write the chords up on the white board, write the structure out. We’ve got different colour pens and stuff. It’s very professional.”

With lyrics written on the road ‘when you’re sitting on a tour bus for eight hours just looking out the window’, Brilliant Sanity shows Sanders as an accomplished and distinctive lyricist, with a passion for the music of words themselves and an eye for the singular image.

In Dan Carey’s Streatham studio, the songs’ structure changed little, but it was Carey’s suggestion that they choose core synthesiser sounds — the Mellotron, the Roland Jupiter, the Korg Trident — to help define the aesthetic of the album. Sanders talks of their time in the studio, of their collective obsession with the Vietnamese restaurant across the street, of how they would set the mood for recording each song using a series of coloured lights, and of how, in breaks from recording the band would go out on the roof and gaze at the moon through Carey’s telescope, “It had,” he says, “a very calming and settling influence.”

“Sometimes,” he says, “a record can take itself a bit too seriously. So it’s good to have a bit of a lighthearted side. It’s good just to enjoy making it, for your own sake — because if you’re enjoying making the songs then other people are going to enjoy listening to them.”

Barry says: Brilliant Sanity is at once comforting and enchanting. Beautifully crafted melody (or the appreciation of it) is something that people sometimes loathe to admit they enjoy, but this collection can't help but make you admit it. Twee plucked melodies, 'friendly' distortion and brilliant hooks. Not as much a guilty pleasure as a confirmation that you need feel no guilt. Great stuff.