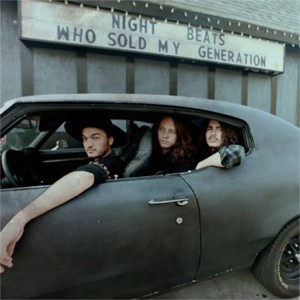 Night Beats release their new album ‘Who Sold My Generation’ on Heavenly Recordings. Their third album and first for Heavenly, it follows the release of their self-titled debut in 2011 and ‘Sonic Bloom’ in 2013.

Recorded on old two-inch tape in Echo Park, Los Angeles at the home of producer Nic Jodoin and featuring co-production and guest bass playing from Robert Levon Been of Black Rebel Motorcycle Club, new album ‘Who Sold My Generation’ goes beyond merely being a retreading of well-worn garage / R&B path. Instead it offers a contemporary take on the psychedelic experience, a heady set of hoodoo voodoo songs.

Very much a record in the great Texan musical tradition of acid-drenched outlaw music, ‘Who Sold My Generation’ picks up where the likes of The Elevators or The Red Krayola left off.

Night BeatsThat's All You Got (feat. Robert Levon Been