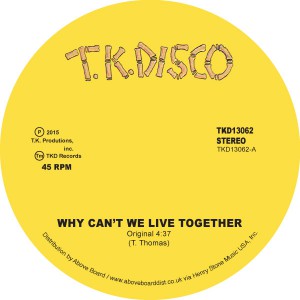 Timmy Thomas' 'Why Can't We Live Together' is a plea for peace and harmony released in 1972 at the height of the Vietnam war, but equally relevant to today's global troubles. Featuring only a Hammond organ, percussion from an early rhythm machine and Thomas's passionate, soulful vocal, this is a sparse, stripped-down production that still sounds amazingly fresh today - a total classic.

This official TK Disco reissue includes the original plus a fantastic update from Australia's Late Nite Tuff Guy of Tuff Cut Records fame, which has already had 62,000 plays on Soundcloud. LNTG sensibly doesn't try to gild the lily, instead just going for a simple 4/4 rhythm, a touch of Martin Luther King Jr and "I have a dream", and a couple of extra minutes of dancefloor time.

In LNTG own words of how their "No More War Rework" came about:

"About 6 months ago, just before I set off on my 5 month tour of Europe I got a message from a good friend of mine asking me if I would edit a track that he loves. I said of course, and asked him what track. Turns out it's a big favourite of mine also. 'Why Can't We Live Together' by Timmy Thomas is an amazing song with a strong message that is even more relevant today than it was back in 1972. The message is clear, it's simple, it's beautiful. I'm saddened by recent events around the world and I've always tried to spread love through music, because for me, music is love. I hope you share the message and enjoy." - LNTG <3