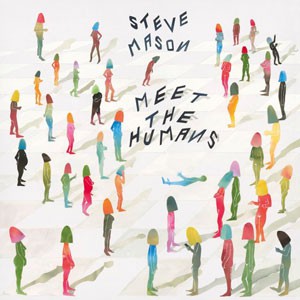 Written at home by Mason, the tracks were then rehearsed in Brighton with touring band mates Steve Duffield and Greg Nielson, before being recorded with Elbow keyboardist and producer Craig Potter at Blueprint Studios in Salford. Recorded in the studios ‘big room’, an ex-factory space with floor to ceiling windows, the album took shape during a smooth and enjoyable six weeks in the early summer of 2015.

Following from his ‘double political concept album’ ‘Monkey Minds In The Devil’s Time’ this album is a move towards a more simple ethic; ‘an album where each song is a separate entity, where there is no great narrative running through it.’

‘Meet The Humans’ is shot through with a sense of renewal following Steve’s recent move to Brighton, swinging musically across dance, pop, folk, dub, and deep house influences. It’s a record which repeatedly returns to core themes, the possibility of others to redeem the self, the opportunity of change for the better in the individual, the joy of life and the world we inhabit, it’s arguably the most complete and direct of Steve’s long discography - eleven personal stories combined into one positive and proper whole, the sweep of the human condition written large and full of love and hope and joy.

Andy says: The funky ex Beta Band maestro returns with a buoyant encapsulation of all that is good in his groovesome world. The lush production and airy vibes make this pretty close to a pop record, but as ever, there's always the melancholy in the melody for Mr. Mason. However, certain tracks on here take us right back to those glorious baggy days of 1989, which I always thought was Steve's musical template. Combining these with the more introspective moments make this possibly the best album of his career so far. Inspirational.