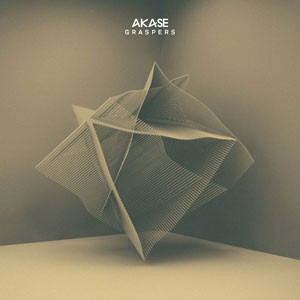 !K7 serve up another superb release here, dropping the debut LP from UK live and studio duo, AKASE, aka Harry “Midland” Agius and Robbie Redway. "Graspers" was recorded over the course of two years in Harry’s studio in South East London. Both members of the group had equal input, putting to good use their respective backgrounds and influences, in the end coming up with something new, fresh and absorbing. With a helping hand from legendary producer and studio wizard Ewan Pearson of Kompakt Records association, this album has come together naturally, at its own pace, with no outside pressures, and that really shows. At just 44 minutes long, "Graspers" is all about capturing emotions and brief moments in time, and it does that expertly. Kicking off with the broody, swelling "Adrift", the album unfolds through glitchy beats and pained vocal lines on "Rust" before tracks like "Beseech" de-humanise Redway’s vocals into fractured organic textures. Percussion ranges from crisp and sharp to slick and uplifting and Redway’s voice takes on many different forms. At once pained, at other times carefree, it lends a compelling edge to the variously frazzled, floating, staccato and sombre drums and synths that frame and drive each track. This is a timeless album that stands up to intimate headphone listening, but it also works for post break-up nights in and emotionally laden post club afterparties. With live shows also in the pipeline, "Graspers" is sure to resonate throughout 2016.