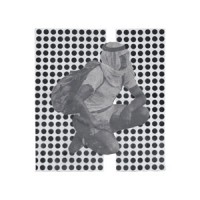 Ulrika Spacek is a British experimental rock band formed in Berlin by Rhys Edwards and Rhys Williams, relocated to Homerton, London. Work on debut album ‘The Album Paranoia’ began in the summer of 2014 in the band’s shared house KEN, and was finished there last month. In conjunction to the making of ‘The Album Paranoia’, the band has curated a number of nights under the name ‘Oysterland’ combining their first live performances with a series of exhibitions. The band's music has drawn various interpretations, a cross pollination of hypnotic fuzz, Verlain-Malkmus guitar idiosyncrasies and intertwining feelings of both angst and melancholia.

Mine says: Ulrika Spacek's debut album is an addictive roller coaster of blissful psychedelia, hypnotic melancholy and raucous, repetitive kraut rock. Heavy and droning in some places, dreamy and pensive in others, its atmospheric soundscape makes it an album to get lost in.