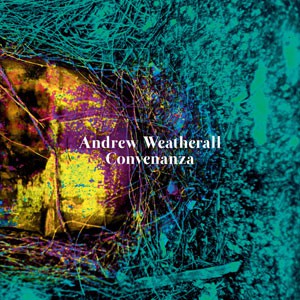 "Convenanza" is the sound of Andrew Weatherall looking back at the clutter of a life thoroughly lived and realising it’s too late to tidy it up in any meaningful way. It would be marvellous to throw out lines about the artist exploring the periphery of his musical vision or redrawing the boundary between confrontational electronica and a fondness for a decent melody. That would however indicate some kind of preconceived plan or, failing that, a musical objective which shaped the record. Even serendipity would suggest a more organised approach to the album than was actually the case. Many years of listening to music with a unique ear has resulted in the disordered cabinet of highlights, touchstones, revelations and half recalled good times that make up being Lord Sabre.

Andrew and his long time fellow recusant Nina Walsh met up in her studio following their enjoyable collaboration as The Woodleigh Research Facility with a view to "doing something" and started tinkering around with the bare bones of some rhythm, top lines and loose vocal meanderings Nina had had sitting on the shelf for a while. Andrew yanked and pulled at the threads and added lyrical ideas until the ghosts of songs started to emerge. Refusing to concern themselves with any kind of structure, they scarpered when tedium threatened and let the music do what it wanted. Sometimes it took a sharp left turn; sometimes it dropped any pretensions of a tune and made do with a wonky groove and at other times simply disintegrated. The post funk punk rhythm of "Frankfurt Advice" takes a deep breath but soldiers on when the disquieting sound of the trumpet playing in the next room intrudes and remains firmly in control despite momentarily stumbling over an unruly guitar. The self-assured top line of "The Confidence Man" collapses in on itself and the loosened beats enjoy a gentle unrestrained boogie atop the solid bassline before the vocal’s final hymnic retreat. Is this sounding incoherent, an uncomfortable disjointed mess? It’s no more so than you’d get dipping arbitrarily into a life or trying to describe any long relationship. Being untidy is allowed; in fact it is to be celebrated as it reflects more truly the jumble of moments any of us experience at the best of times and we all recognise can never be caught on the page. The upside of this promiscuous attitude to music is the sheer joy when it all comes into focus on "We Count Our Sins"… The trumpet returns but this time it’s the soaring spirit of the song which strains against a deeply anchored bassline. The message of abandonment in the verse is thwarted by the obstinate optimism of the key refrain and there’s a sense of resolution as the song ends and melds into the blissful "Thirteenth Night".

That Andrew has grasped random thoughts, memories and life markers then assembled them so they become such a satisfying musical voyage is a testament to a mind that can draw pictures in the air but still has trouble finding the on-off button on his laptop.