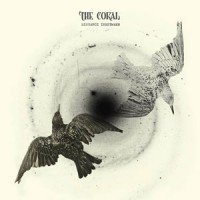 'Distance Inbetween' is The Coral’s first album of original material since 2010’s Butterfly House, a gap punctuated by last year’s surprise release of their lost album, 'The Curse of Love'. Since their debut EP release in 2001 the band have sold over a million UK albums, with five reaching the Top 10 including 2003’s chart-topping 'Magic and Medicine'. Their eight Top 40 singles include Dreaming Of You, In The Morning, Pass It On, and Don’t Think You’re The First.

Recorded at Liverpool’s Parr Street Studio with co-producer Richard Turvey, 'Distance Inbetween' was recorded live and mostly in just one take. The seams of each of the album’s 12-tracks are purposely rough-hewn and pave the way for a new visceral sound from a totally reenergised band.

"Before we started making the album we had discussed that we wanted it to be more minimal and rhythmical,” explains James Skelly (vocals, guitars). “We thought ‘if you've got a rhythm section that’s been playing together for almost twenty years, why not make that the centre of the songs?’"

“Paul was playing with Ian in their band, Serpent Power, and we'd all been mates with him for years,” says James. “We already had a couple of tunes recorded and Ian suggested Paul add some guitar. His parts really enhanced the tracks; he understood where he needed to leave space. From that point we didn't look back. We had a full line-up and were confident we could make an album that would stand next to the others."

Andy says: Based on The Wirral, which geographers will tell you is directly between Liverpool and Wales, it's heartening that this classic Northern band sound precisely like a blend between Gorkys and Super Furries on the one hand, and Shack and the Bunnymen on the other. Throw in The Doors with a sprinkling of 60's psych and you have a superb blend: cosmosis if you will! This is their come back album. And it's excellent!

The CoralMove Through The Dawn