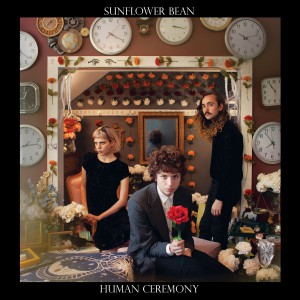 “You’re allowed to obsess over Black Sabbath as well as The Cure,” adds Julia. “It’d be boring if everything was just one way or the other.”

That diversity defined the group’s approach since Nick and Jacob started jamming back in high school. They would hole up in Jacob’s Long Island basement for hours on end, channelling this vast cadre of influences. Julia’s addition would only expand that creative palette further in 2013. Through constant gigging around New York, Sunflower Bean sprouted into a sonic enigma, boasting a fiery musical call-and-response that serves as a centrepiece, giving the music what Jacob refers to as a “lyrical aspect” between the guitars, drums, and bass.

They transferred this multi-headed energy into their 2015 Independent EP, Show Me Your Seven Secrets. At the same time, this distinct alchemy enchanted ever-growing audiences live. By the time, they entered the studio for Human Ceremony, Sunflower Bean had a lively aural cauldron from which to draw.

They took the summer of 2015 off and retreated to Jacob’s basement to write together. Taking the ideas out of the basement, they hit a Brooklyn studio with producer Matt Molnar [Friends] and tracked eleven tunes in just seven days. Whereas the EP was recorded after Sunflower Bean played 100 shows in one year, Human Ceremony showed the band’s studio side with richer soundscapes, overdubs, and music that had yet to be debuted live.

On the lead track “Easier Said,” Julia’s delicate vocals glide over a lilting clean guitar that spirals off into a vibrant hum.

“When you’re in a band, you always dream about the first record,” Julia concludes. “It’s that moment where you explore everything that’s been inspiring you.”