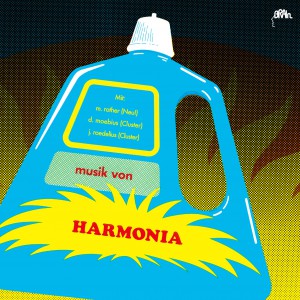 Musik Von Harmonia is the debut album from the highly influential Krautrock/Kosmische Musik group Harmonia. Harmonia, was formed by the addition of Neu! guitarist Michael Rother to Cluster, the duo of Hans-Joachim Roedelius and Dieter Moebius. They recorded the album from June to November 1973, in Forst Germany.

Ned Raggett's review for Allmusic opens: "The debut Harmonia album is at once a product of their source bands and a fine new twist on them, resulting in music that captures what for many is the Krautrock ideal..." He adds "...it's at once playful and murky, steady and mechanical, a supergroup of sorts who easily achieves and maintains such a seemingly overstated status by embracing a variety of approaches that work wonders."

Darryl says: Sublime Krautrock album, and one of the best in my humble opinion, from the combined talents of Michael Rother from Neu! and Moebius and Roedelius of Cluster fame.