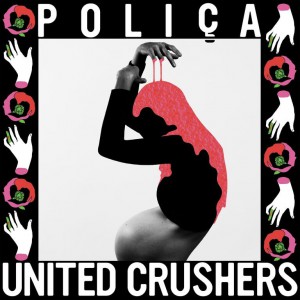 ‘United Crushers’ is POLIÇA’s third full length release and most remarkable album yet. Lead singer Channy Leaneagh and non-touring fifth member producer Ryan Olson wrote the album in Minneapolis in the winter of 2015 and recorded it at the renowned Sonic Ranch Studios in El Paso, TX with their live line up of dual drummers, Drew Christopherson and Ben Ivascu, Chris Beirden on bass. The new album builds on POLIÇA’s signature synthesizer and percussion-heavy sounds with more complex arrangements, tighter grooves and a bigger, crisper hi fi punch.

The record, a tribute to their hometown of Minneapolis, was named after the graffiti tag seen throughout the city as a reminder of its bleak past and uncertain future and is short for “United States of Dreams Be Crushed.” Even at its darkest, the record is musically the band's most upbeat and celebratory. It is a weapon meant to empower the weak, the forgotten, and the disenfranchised; its very creation an act of rebellion in the face of the hopelessness that casts such a long shadow over Middle America's slow urban decline.

Barry says: This record, more so than 2014's Shulamith oozes a sort of dystopian dread, displayed through repetitive synth-swells and rippling arpeggios. Though this is in many ways a record about decay, it seems hopeful, like there is something to be gained by adapting. Through adversity comes triumph. This is a bleak yet upbeat offering, dynamic, and exciting.