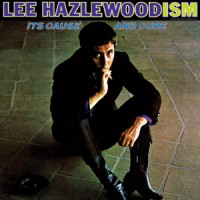 The mid-to-late '60s were strange days for Lee Hazlewood. Having struck gold as songwriter and vocal foil for Nancy Sinatra, he signed up to MGM as an artist in his own right, and between 1966 and 1968, produced three ambitious solo albums that were eclectic, idiosyncratic, and most of all, unpredictable.

It was a happy time for Lee; his music was hot on the charts, he was fully immersed in his collaboration with his muse, Suzi Jane Hokom.

The second of his MGM trilogy - 1967's peculiarly named Lee Hazlewoodism: Its Cause And Cure - took on countrified French ye-ye (“The Girls In Paris”), a tale of a young bullfighter built on Spanish guitar and choral cowboys (“Jose”), a string-drenched song about the passing of time (“The Old Man And His Guitar”), and a western epic about a Native American tribe (“The Nights”). And that was just the first four tracks. Elsewhere, the honky tonk madness of “Suzi Jane Is Back In Town,” the Byrds-like jangle of “In Our Time” and–in the bonus tracks–an instrumental named “Batman” confirm this to be one of Hazlewood's most far-ranging, far-out LPs ever.

It’s the result of two main factors: ambition–to top Phil Spector, primarily–and cash, which paid for orchestras, plush studios, and the inestimable talents of arranger Billy Strange. “I think the big sound of those records came out of the Spector thing,” says Hokom, in the new liner notes. “If you can have a big sound and you have money to burn… it was a flamboyancy.”

Released before the Nancy & Lee LP–a bona fide hit for Reprise Records–Hazlewoodism was a tougher nut to crack, a record that confused by combining po-faced delivery with unabashed comical touches. By 1967, Hazlewood had founded the LHI imprint, and was busy building his own empire–one we've been lovingly archiving for the past few years. We now present this missing link in the story, plus predecessor, The Very Special World Of Lee Hazlewood and follow-up, Something Special. Welcome to Hazlewood's magnificent–and mad–MGM years.

Lee HazlewoodTrouble Is A Lonesome Town

Various ArtistsLoma: A Soul Music Love Affair Volume Two - Get In The Groove 1965-68

Pattern FormsPeel Away The Ivy