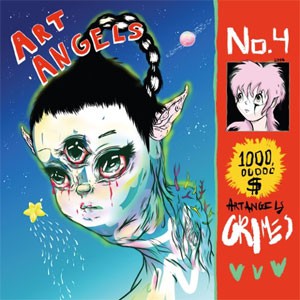 As Marylin Manson once said, "This Is The New Shit"! Grimes is back in the house, beating up your speaker stack at her batshit best. Faced with the tricky decision of how to follow up her trend setting, hot cake-like selling breakout smash "Visions", the now LA-based musician took the obvious route of synth-baroque chamber music. Well at least on oddball opener "Laughing And Not Being Normal". From there we accelerate through the whole host of iPod-friendly pop, from country EDM, through baile funk and nu disco to chill out. But before you lose faith that the mighty Grimes has fallen in with the wrong crowd since her move to LA, all those mainstream tropes are perfectly subverted with a well judged post modern subtlety, while retaining all the hooks, riffs and melodies which makes pop, well, popular. Spanning over 14 tracks "Art Angels" features collaborations with Janelle Monáe and newcomer, Taiwanese rapper Aristophanes, but like all of her previous albums was written and recorded entirely as a solo endeavour. The new album features more live instrumentation than ever before with Grimes playing piano, guitar and violin and continuing her evolution as a musician and a producer for her most ambitious album to date.

Millie says: The pop sensation Grimes’new album was an instant hit, her electro style remains but comes back with even more pop-power (which I didn’t think was even possible!) It has a feisty cartoon anime vibe, extravagant reverb and dreamlike lyrics for her angelic vocals.