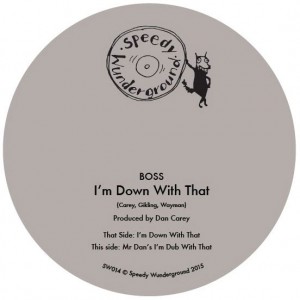 BOSS are Guro Gikling of All We Are, Theresa Wayman of Warpaint, Sarah Jones, who has previously drummed for Hot Chip and Yeasayer, and Speedy Wunderground head-honcho Dan Carey, who has recently been involved in the Sexwitch project with Natasha Khan and TOY.

In the time honoured spirit of the label, the single was produced in a day at Dan’s south London studio and is their first release, yet the inception of the band goes back to 2012 when Dan met Theresa at a festival in Slovakia (he would also later produce All We Are’s debut album).

“Being a Warpaint fan I found her backstage and told her I was the best psychedelic rock producer in the world,” remembers Dan.

“The exact words of her response were ’that’s the last fucking thing we need. See you later.’ “

Despite the inauspicious meeting, Dan would later be recruited to work on Theresa’s forthcoming solo album and having met Guro on tour, Theresa invited her to also work on the long-player.

Born out of these album sessions, the BOSS track came out of post recording jams and after recruiting drummer Sarah Jones, a 20 second snatch of an almost 15 hour jam was eventually worked into ‘I’m Down With That’.