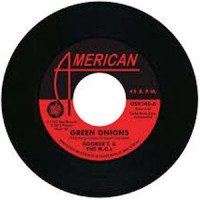 Booker T & The MGs will be forever synonymous with the sound of Memphis soul, as defined by Stax Records for whom they were the house band. In 1962 they made it to No.1 in the R&B charts and peaked at No.3 in Billboards Hot 100 with “Green Onions”. The classic 12-bar blues anthem features Steve Cropper on a Fender Telecaster and Booker T Jones’ rippling Hammond M3 organ. It's the ultimate R&B / mod soul instrumental, and one of the most recognisable tracks ever.The Mar-Kets (later The Marketts) were a California instrumental surf band best remembered for their 1963 million-selling album 'Out Of Limits'. “Balboa Blue” features on their debut LP 'Surfer’s Stomp' and first appeared on the northern soul scene at Manchester’s Twisted Wheel club.

A. Booker T &The MGs - Green Onions
B. The Mar-kets - Balboa Blue