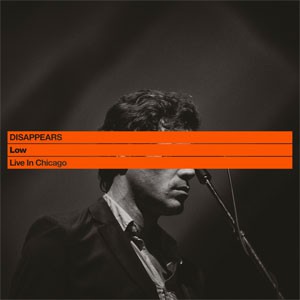 Recording of Disappears performing David Bowie’s classic 1977 album ‘Low’ in its entirety, mastered by Sonic Boom. Limited-edition orange vinyl, housed in a stunning see-through PVC sleeve, complete with the tracklisting on a sticker, as an homage to the original.

The band ran through the album twice on November 22 last year as part of a concert series entitled Bowie Changes, which featured several Chicago-based musicians reinterpreting the Bowie catalogue to mark the opening of the ‘David Bowie Is’ exhibition at the city’s Museum of Contemporary Art. “Naturally we chose the hardest one,” jokes guitarist/singer Brian Case. They succeed by being faithful to the original, while turning it into something that sounds very much like a Disappears record. The seven regular songs on the first side are buzzing and muscular, injected with steroids by the ferocious rhythm section of Noah Leger (drums) and Damon Carruesco (bass). However, it is the more avant-garde songs on the B-side that are the revelation. Stripped of Eno’s EMS Synthi AKS and Minimoogs, ‘Warszawa’ becomes an intense battleground between Brian and Jonathan van Herik’s treated guitars, ‘Subterraneans’ swaps saxophones for Rother-esque kosmiche curlicues and ‘Weeping Wall’ builds to an appropriate and fearsome (Berlin) wall of noise. It’s stunning.

We first met Brian when his old band The Ponys played a Sonic Cathedral show back in 2006. He formed Disappears a couple years later, and the band have since released five albums through venerable Chicago indie label Kranky, the most recent, ‘Irreal’, coming out last January. They were also recently namechecked in Kim Gordon’s book ‘Girl In A Band’, thanks to her ex-Sonic Youth bandmate Steve Shelley being Disappears’ drummer for a time. In 2013 we got them to record a cover of Kraftwerk’s ‘Trans-Europe Express’ for a long sold-out split 7”, but with ‘Low: Live In Chicago’, they have excelled themselves.