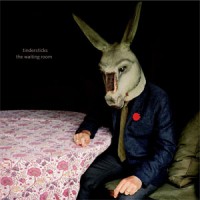 Tindersticks release their new album ‘The Waiting Room,’ a milestone not just numerically, but musically and creatively. Their first studio album since 2012’s critically acclaimed ‘The Something Rain' (9/10 DiS, 8.1 pitchfork, 8/10 the Quietus, 8/10 DIY, 4/5 Guardian, 4/5 Independent on Sunday, 4/5 Uncut, 4/5 Q, 4/5 Observer) is the most ambitious, diverse and elaborate album you’ll have heard from Tindersticks in recent years. 2 decades into their musical voyage Tindersticks, established masters of restraint and poetic human emotion, are a band now confidently making the best songs of their career.

‘The Waiting Room' breathes gravity and features guest appearances by Jehnny Beth of Savages and a particularly poignant duet with long time friend of Stuart Staples, Lhasa De Sela. Not just an album but also an elaborate collaborative artistic project, each track is accompanied by a short film, each one a visual interpretation by it's own director. Christoph Girardet, Pierre Vinour, Claire Denis, Rosie Pedlow and Joe King, Gregorio Graziosi, Richard Dumas and Gabriel Sanna.

Millie says: Hazy and harrowing, The Waiting Room is an intimate album with soft lyrics which are told in a story-like manner holding incredible depth. It has remnants of Celtic folk influence from the percussion, orchestral choruses and tinkering sounds of loveliness!

1 Follow Me
2 Second Chance Man
3 Were We Once Lovers?
4 Help Youself
5 Hey Lucinda
6 This Fear Of Emptiness
7 How He Entered
8 The Waiting Room
9 Planting Holes
10 We Are Dreamers!
11 Like Only Lovers Can