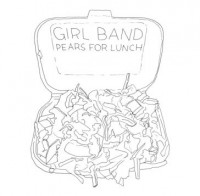 7” single, hand folded and numbered by Girl Band themselves.

One sided 7” features an etched B-side of drummer Adam’s head.

‘Pears For Lunch’ is taken from Girl Band’s debut album ‘Holding Hands With Jamie’ out on Rough Trade.

The release comes a few years into their tenure; a few years after their first tour; nine days crammed into a Fiat Panda; a few years of stamping 7” sleeves to sell at merch tables and mail-order; a few years of writing songs and touring and developing a live ferocity unmatched by nearly anyone.

Recorded in April 2015, two days after returning home from their first-ever US tour, the nine tracks making up ‘Holding Hands With Jamie’ capture, more than any previous recordings, the tension and abrasive energy of a Girl Band performance.

This young Dublin foursome are creating vital, propulsive, and almost terrifyingly energetic noise rock that pulls as much influence from classic techno as from their more obvious postpunk, noise and industrial predecessors.

“It’s hard to overstate how heart-stopping it is to see these four guys from Dublin play live, but I’ll say they make it sound like the whole world is going to literally explode in a massive, interstellar ball of fire. It's the end of everything and they're both indifferent and full of rage.” - NPR

“The one blindingly obvious thing about Girl Band is that this is fucking great.” - Noisey

“Their cover of [Yorkshire exponent of terror techno] Blawan’s ‘Why They Hide Their Bodies Under My Garage?’ features distortion and noise like a Hoover crying. It is mechanistic and rhythmical-industrial, not grunge at all, eight minutes of pure panic.” - The Guardian