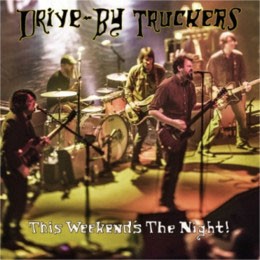 In the band’s own words: “Thrilled to announce that our long awaited live album, recorded over three nights at the historic Fillmore in San Francisco CA, will be released […]! Our long-time producer, David Barbe, acquired the necessary mobile gear to record us and flew out to San Francisco to capture our three-night stand in November of 2014. We hired some horns, sold some tickets and played three special and unique shows. From those shows we have sequenced a sort of ultimate live DBT collection, one that hopefully captures the essence of our life’s work into one cohesive whole.

“We are releasing two versions... a shorter 13 song version called ‘This Weekend’s The Night’ which provides a Best Of version snapshot of our live show [and] also a larger 35 song box set entitled ‘It’s Great To Be Alive!’ which goes far more in-depth into the DBT catalog and history. Songs and stories spanning thirty years of Drive- By Truckers sequenced to hopefully give as close as possible document of the DBT show.”