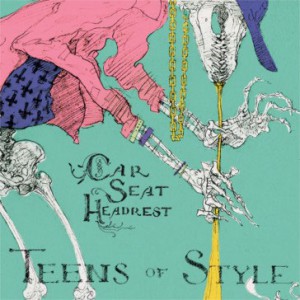 Matador Records are thrilled to announce the signing of Car Seat Headrest and the release of ‘Teens Of Style’, with ‘Teens Of Denial’ to follow soon after in 2016.

This prolific artist (also known as Will Toledo) comes to Matador having already crafted an 11-album catalogue of staggering depth, all self-released digitally, gaining him an obsessive following and over 25,000 downloads - all without the muscle of a manager, label, agent, or publicist - until now.

Car Seat Headrest began in 2010 in Will Toledo’s hometown of Leesburg, Virginia. Needing a place of solitude (and soundproofing) where he could record vocals undisturbed, a 17-year-old Toledo set up shop in the family car. Toledo’s catalogue is sharp, literary and culturally omnivorous as it touches upon youth and death, love and depression, drunken parties and 2nd Century theologian. Ever surprising, his lyrical imagery ranges from playful to sexually frank to sorrowful, often within the same song.

After relocating to the Seattle suburbs in 2014, Toledo assembled a line up with bassist Ethan Ives and drummer Andrew Katz. ‘Teens Of Style’ is the first Car Seat Headrest album recorded with a full band and the sound is vibrant and powerful with a wide stylistic range.

On ‘Teens Of Style’ Toledo has taken material from the first three years of the band’s existence and reworked it to generate some of the most realized arrangements to date. Drawing material from ‘3’ (2010), ‘My Back Is Killing Me Baby’ (2011) and ‘Monomania’ (2012), ‘Teens Of Style’ provides a concise overview of the band’s many sonic and emotional facets, with the songs ranging from electronic psychedelia to punky anthems to melancholic acoustic numbers.

The longest track on ‘Teens Of Style’, ‘Times To Die’ is just under seven minutes, applying breakbeat cut-ups and ‘Low Rider’ horns to a groove-driven neo-psych jam with lyrics about Judaism, Hinduism and the record business. Similarly, ‘Maud Gone’ is a wistful 60s-inspired pop number paying homage to Yeats’ unrequited love, while the intricate party track ‘Los Borrachos’ borrows its title from the Diego Velasquez painting.

Car Seat Headrest’s conceptual ambition and stunning songwriting has been apparent since its early days of laptop recording, the scale of Toledo’s vision going far beyond the constricting ‘lo-fi’ term. Now on his Matador Records debut we witness Toledo presenting his intricate ideas with more clarity and refinement than ever, delivering an enthralling collection of songs destined for wide acclaim.

“Toledo’s commitment to giving listeners a direct line to his inner monologue is the kind of thing that inspires hardcore fanhood - the ability to get lost in Toledo’s work is the entire point.” - Pitchfork