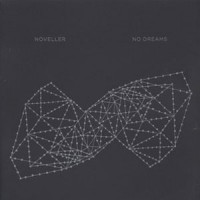 Building on the breakthrough of her “Glacial Glow” album, and coming off of tours opening for St. Vincent and The Jesus Lizard (something that only makes equal sense for Noveller), guitarist and filmmaker Sarah Lipstate emerged with what AllMusic called “an incredible and complex statement, and one that clearly stands as a challenge to herself and her audience alike.”

The album. “No Dreams” would continue to elevate her songwriting and soundscaping to new heights, with Pitchfork raving; “Sarah Lipstate creates miniature musical worlds, places that you feel like you’ll never leave as long as the record is playing.” Lipstate, a former member of Parts & Labour and Cold Cave, as well as a collaborator with such luminaries as Lee Renaldo and Jim Thirlwell, along with being a member of both Rhys Chatham’s Guitar Army and Glenn Branca’s 100 Guitar Ensemble, has emerged as one of the most exciting and interesting guitarists of this era. “No Dreams” cements her as a talent on the rise. Originally released as a limited edition on the experimental label Important Records, following the success of her most recent “Fantastic Planet” album, Fire Records is reissuing the album on 180 gram vinyl to a wider audience.