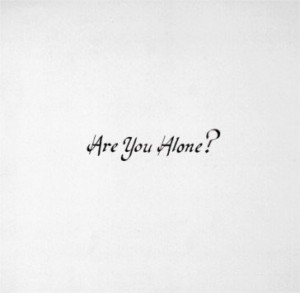 In 2013, the Canadian duo, comprised of principle songwriter and vocalist Devon Welsh and producer Matthew Otto, made a lasting impression with their debut full length ‘Impersonator’, which garnered praise from tastemaker and mainstream media alike as one of the year’s best and most notable albums. The band have since been fastidiously crafting their second studio album while simultaneously touring the world with their own shows as well as opening for Lorde on her North American tour.

‘Are You Alone?’ sees the expansion of Majical Cloudz’ sonic and narrative scope in adventurous new directions while retaining the unmistakable building blocks that have singled out the musical-performance art project as a unique proposition. Simple yet emotionally confounding lyrics showcasing a raw vulnerability which explore love and friendship, heartbreak and sadness, delivered in Welsh’s arresting baritone and filled out by minimalist yet evocative production and instrumentation, bringing the songs’ underlying emotional core to stirring realization. Throughout 12 poignant and resonant compositions Welsh and Otto have created a soulful and cinematic novella, continuing their artistic evolution at the forefront of brave and uncompromising musical performance.

Written and recorded between Montreal and Detroit, ‘Are You Alone?’ features drum, viola and piano support from Canadian composition auteur Owen Pallett, known for his work with Arcade Fire, Grizzly Bear, Death From Above 1979 and Alex Turner of the Arctic Monkeys.

Following early releases as well as collaborations with artistic kin Grimes, Majical Cloudz broke into recognition with their ‘Turns Turns Turns’ EP in 2012 and soon after signed to Matador. In addition to being nominated for the 2013 Polaris Music Prize, ‘Impersonator’ received critical praise from Rolling Stone, Pitchfork, Stereogum, VICE and NME among others. In 2014 the duo were personally selected by teenage pop phenomenon Lorde as the opening act for her North American tour, taking their intimate stage setup to theatres across the continent.

Their incredible conceptual live performance - stark and direct yet with moments of Pagliacci-esque silliness - gained plaudits from Billboard, Grantland, and Pitchfork and was described by Lorde as “one of the most simple and moving things I have seen, ever.” The 2014 tour with Lorde was captured in in the Majical Cloudz documentary ‘A Lot Of Humans’, directed by Neil Corcoran with an original soundtrack by the band. They were further highlighted with a summer cover story feature on Pitchfork.

Disappeared
Control
Are You Alone?
So Blue
Heavy
Silver Car Crash
Change
If You're Lonely
Downtown
Easier Said Than Done
Game Show
Call On Me