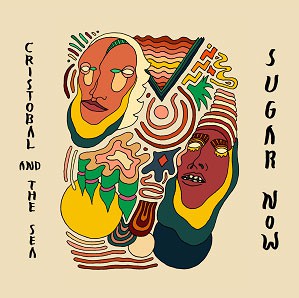 Cristobal and the Sea are a proper European union of a band, if ever there was one. The quartet hail from four corners of our diverse continent. They are: Alejandro Romero from Spain (bass/vox), João Seixas from Portugal (guitar/vox), Leïla Seguin from Corsica/France (flute/vox) and Josh Oldershaw from old Blighty (drums).

After signing to City Slang (Sinkane, Caribou, Junip, Lambchop) and releasing their debut EP ‘Peach Bells’ last year, the band spent the duration of February locked in Namouche studios in Lisbon (Portugal) working on their forthcoming debut album with producer Rusty Santos (Animal Collective, Owen Pallett, DJ Rashad, Ariel Pink). Entitled ‘Sugar Now’, the record is set for release later this year, with this new single ‘Sunset Of Our Troubles’ displaying the band’s mystical, dreamy & enticing sounds wonderfully, offering a little glimpse of what to expect from the forthcoming debut.

Young, enormously gifted, very charismatic and incredibly laid back, Cristobal And The Sea are devouring life as only the young and carefree know how.