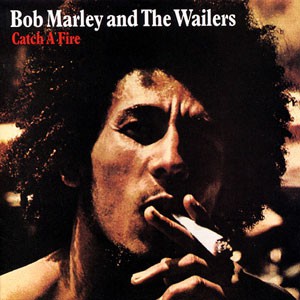 'Catch A Fire' was the major label debut for Bob Marley and the Wailers, and it was an international success upon its release in 1973. Although Bob Marley may have been the main voice, every member of the Wailers made valuable contributions and they were never more united in their vision and sound. All the songs were originals, and the instrumentation was minimalistic in order to bring out the passionate, often politically charged lyrics. Much of the appeal of the album lies in its sincerity and sense of purpose - these are streetwise yet disarmingly idealistic young men who look around themselves and believe they might help change the world through music. Marley sings about the current state of urban poverty ("Concrete Jungle") and connects the present to past injustices ("Slave Driver"), but he is a not a one-trick pony. He is a versatile songwriter who also excels at singing love songs such as his classic "Stir It Up." Peter Tosh sings the lead vocal on two of his own compositions - his powerful presence and immense talent hint that he would eventually leave for his own successful solo career. More than anything else, however, this marks the emergence of Bob Marley and the international debut of reggae music. Marley would continue to achieve great critical and commercial success during the 1970s, but 'Catch a Fire' is one of the finest reggae albums ever. This album is essential for any music collection.